Crash of a Cessna 560XL Citation Excel in Oroville 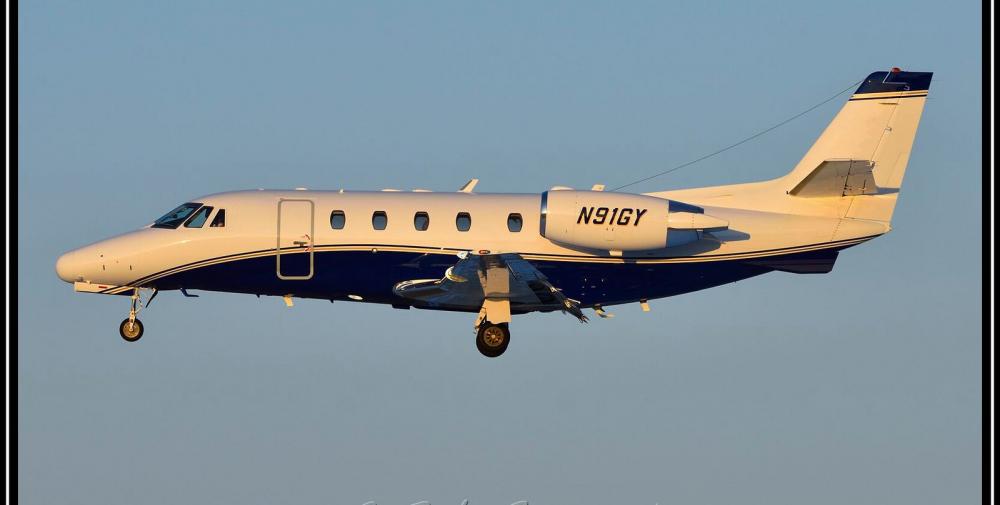 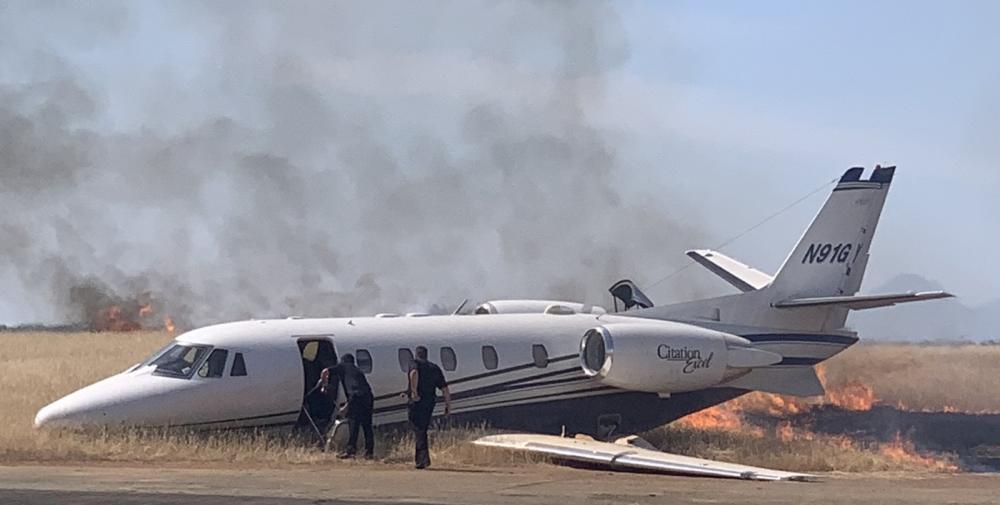 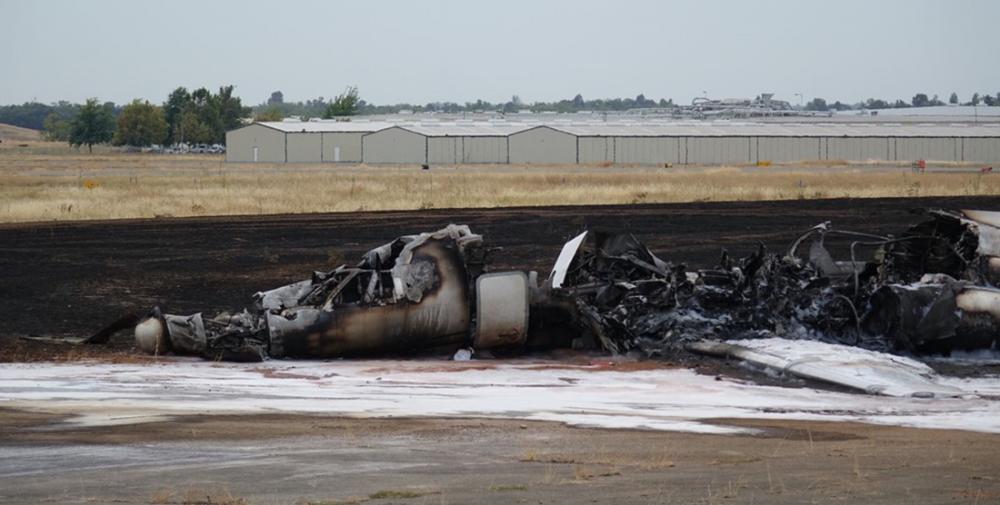 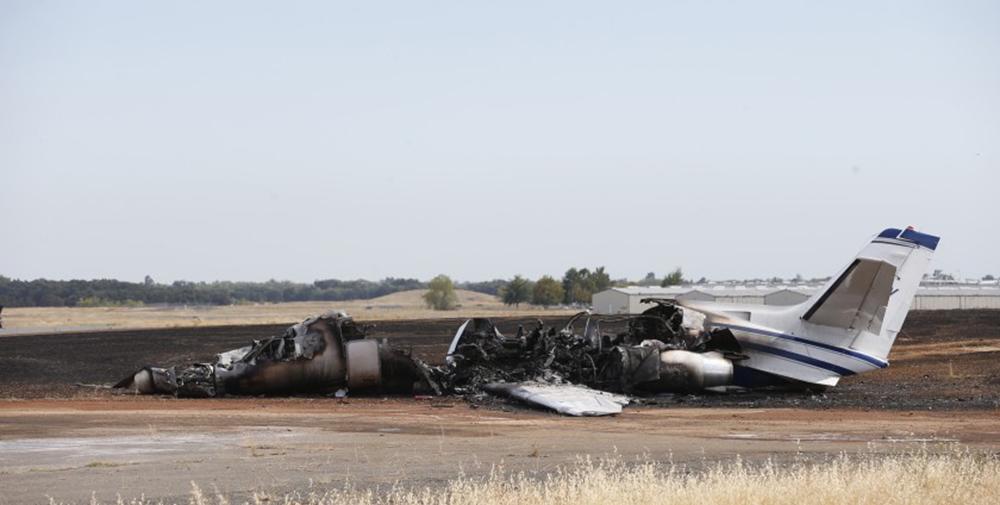 Registration:
N91GY
Flight Phase:
Takeoff (climb)
Flight Type:
Charter/Taxi (Non Scheduled Revenue Flight)
Survivors:
Yes
Site:
Airport (less than 10 km from airport)
Schedule:
Oroville - Portland
MSN:
560-5314
YOM:
2003
Flight number:
DPJ91
Location:
Oroville
California
Country:
United States of America
Region:
North America
Crew on board:
2
Crew fatalities:
0
Pax on board:
8
Pax fatalities:
0
Other fatalities:
0
Total fatalities:
0
Circumstances:
On August 21, 2019, about 1132 Pacific daylight time, a Cessna 560XL airplane, N91GY, overran the departure end of runway 2 following a rejected takeoff from Oroville Municipal Airport (OVE), Oroville, California. The two airline-transport pilots and 8 passengers were not injured. The airplane was destroyed by a post-crash fire that consumed a majority of the airplane. The airplane was registered to Jotts LLC, and was operated by Delta Private Jets, as a Title 14 Code of Federal Regulations Part 135 on-demand charter flight. Visual meteorological conditions prevailed, and an instrument flight rules flight plan was filed. The flight was originating at the time of the accident and was destined for Portland International Airport (PDX), Portland, Oregon. The pilot flying reported that prior to takeoff, they had a waypoint fix and departure change, which he updated within the flight management system. As they taxied onto runway 2, he called for the before takeoff checklist. Following completion of the checklist, they initiated takeoff, and the non-flying pilot called "airspeed alive," V1, and Vr. The pilot flying stated that "it was just a weird sensation" as he pulled the yoke back and the airplane didn't lift off. The pilot flying further stated that he pulled the yoke back a second time and noticed no movement of the nose. Shortly after, the non-flying pilot called for an abort, and the pilot flying applied full thrust reversers and maximum braking. Subsequently, the airplane exited the departure end of the runway, impacted a ditch, and skidded across a grass covered area, where a post impact fire ensued. Review of surveillance video from a fixed-based operator (FBO) located at OVE showed the airplane holding short of runway 2 for about 3 minutes, 44 seconds. The airplane then taxied forward toward runway 2, stopped, and remained stationary for about 18 seconds, until it began to taxi again onto the runway. After lining up on the runway, the airplane remained stationary for about 16 seconds. Once the takeoff roll was initiated, the airplane traveled out of the camera frame 48 seconds later. The position where the airplane moves out of the camera frame was about 730 ft beyond the departure end of runway 2. Examination of the accident site revealed that the airplane came to rest about 1,990 ft beyond the departure end of runway 2, on a heading of about 060° magnetic. Review of a photo taken by a witness prior to the airplane being consumed by the fire, revealed that the airplane was mostly intact and resting on the underside of the fuselage and wings. Examination of the runway revealed tire transfer marks which originated from the runway 2 hold short line and progressed onto the runway, and continued throughout the entire length of the runway, overrun, adjacent runway, grassy area, taxiway, and grassy area near the main wreckage. The wreckage was recovered to a secure location for further examination. 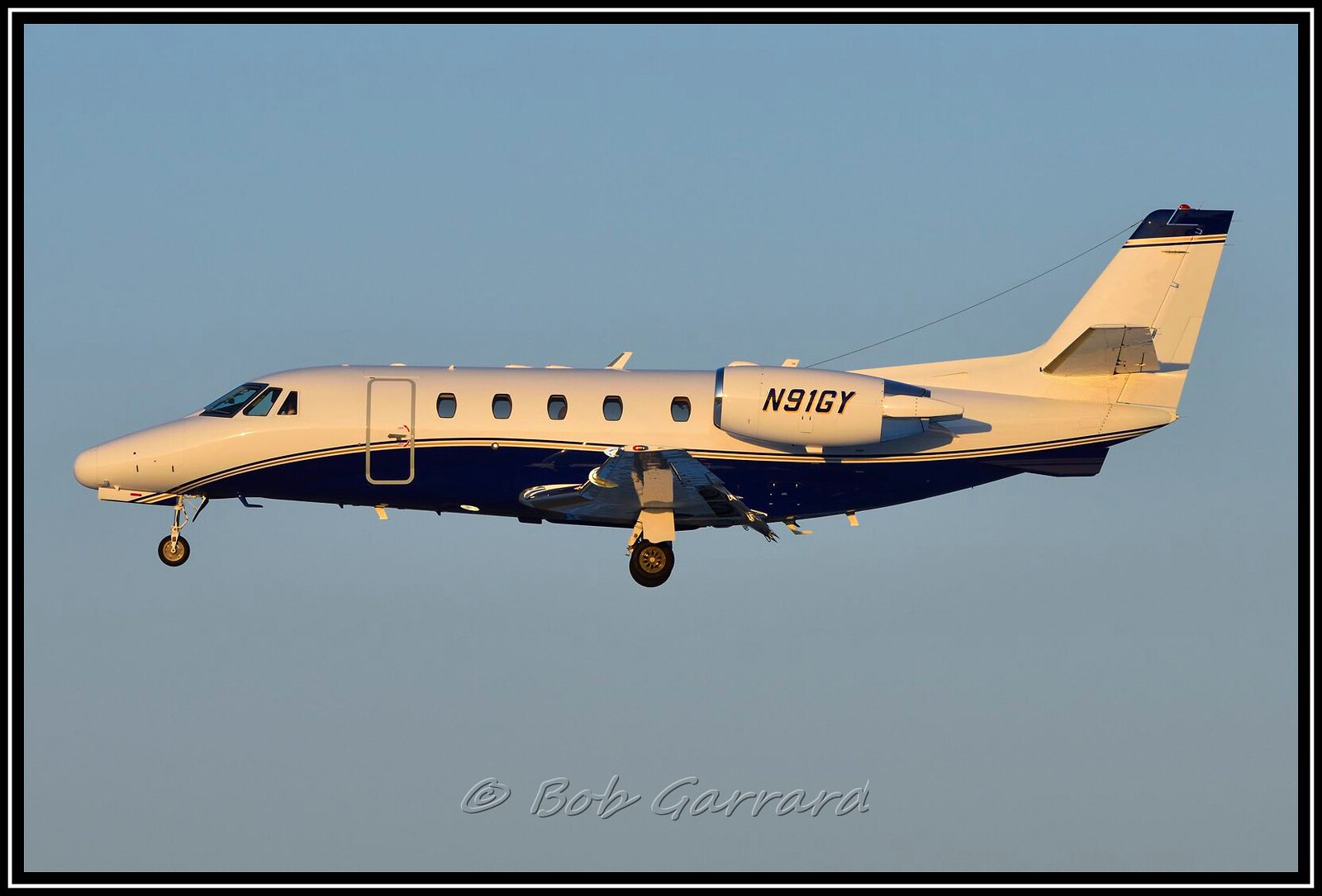 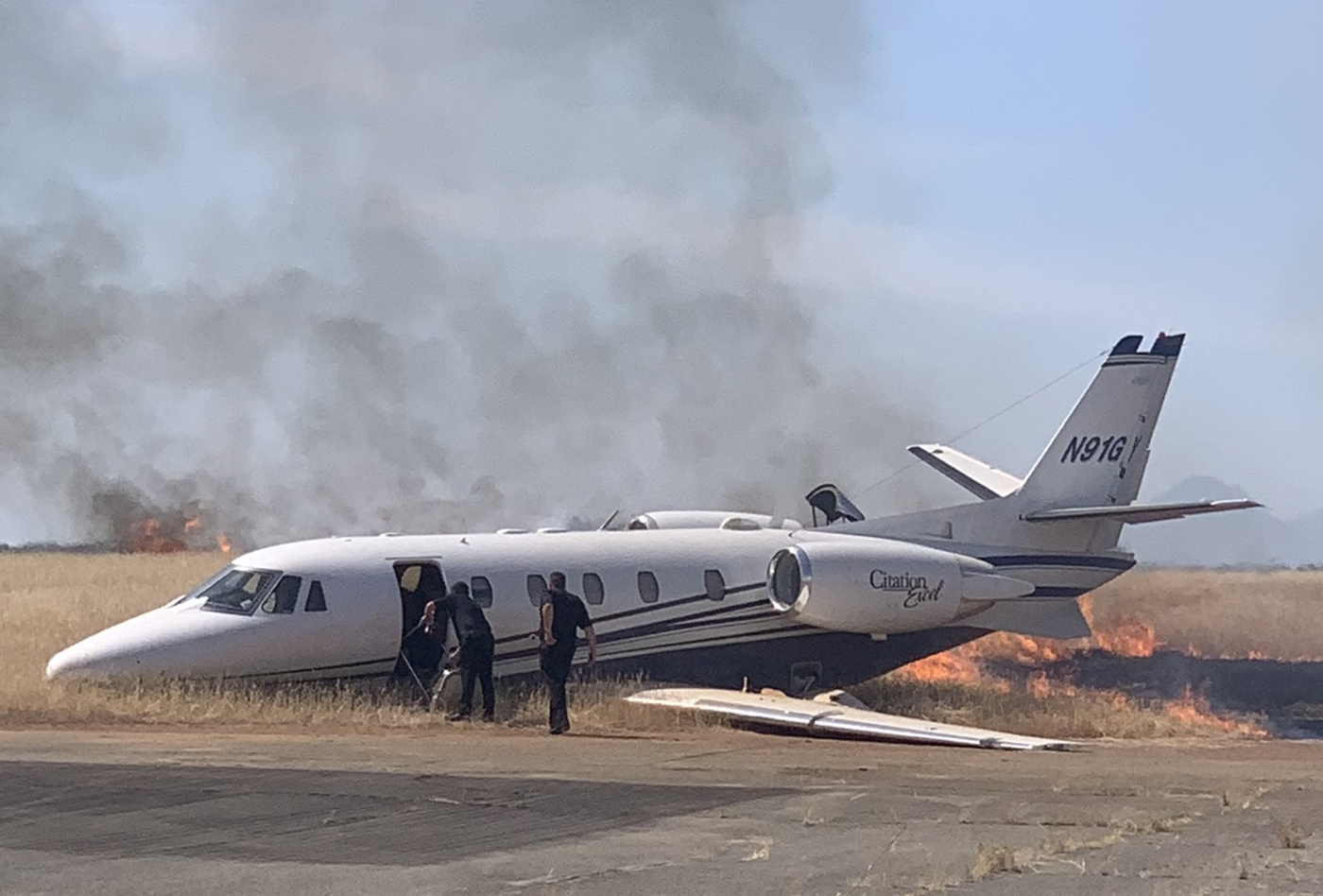 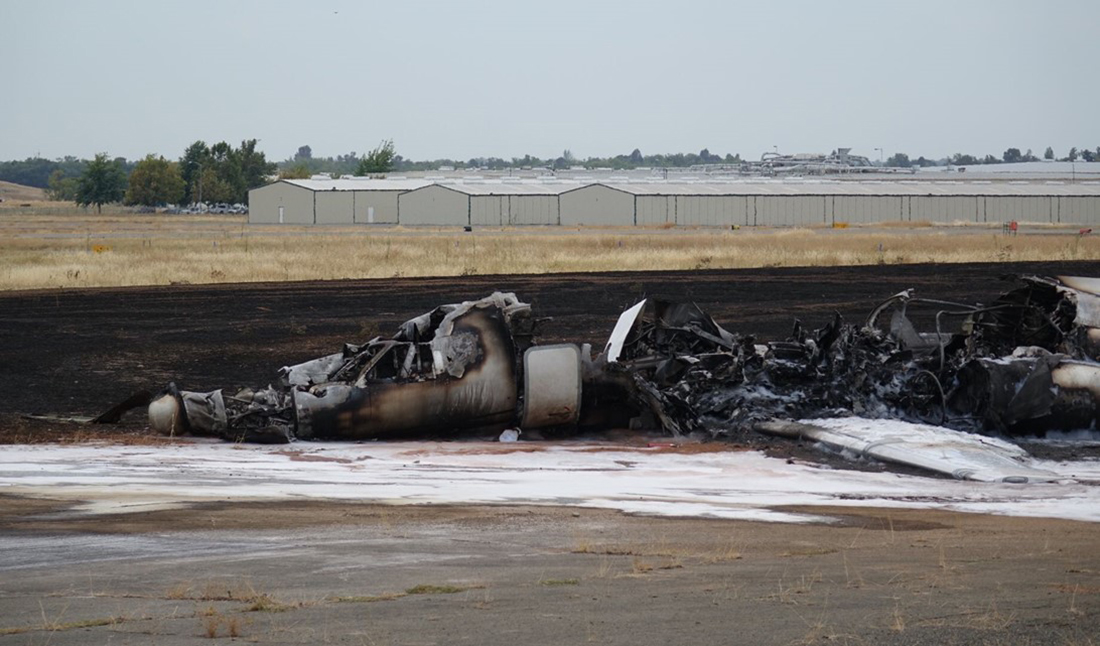 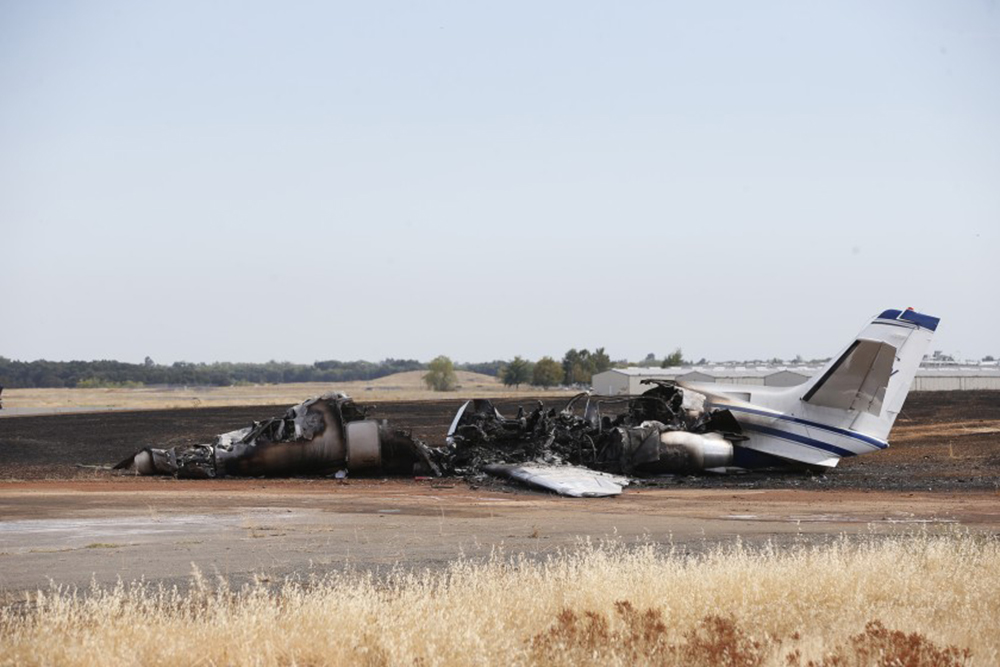